Today’s conversation is with Shannon Huffman Polson. Shannon and I have a mutual friend who connected us and suggested that we really needed to meet. The thing that intrigued me about Shannon was that she was one of the first women Apache helicopter pilots. 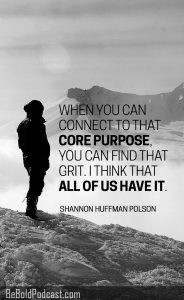 I have a cousin-in-law (a woman) who is also an Apache pilot so I kinda knew how special this was. But I didn’t realize just how much so until after speaking with Shannon. She figures there’s probably fewer than 100 women trained for this. Fewer than 100!

So yeah, there’s that. But there’s much more going on with Shannon. She’s an author, speaker, wife, mom of two boys, and just an overall super woman.

We covered a lot of interesting topics during our conversation including her path to becoming an Apache helicopter pilot and how a defining moment in her youth, really just a question asked by her dad on a soccer field, influenced the rest of her life. 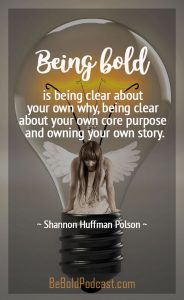 We talk about her book, North of Hope, which is the story of her moving through grief after her dad and step-mom were killed in a rare grizzly bear attack in the arctic.

While this whole conversation was beautiful, toward the end, Shannon dug into some of her life philosophies that I really took to heart. Specifically concerning the importance of owning our own story, as she says, and taking control of our own narrative.

Shannon’s a great storyteller in general but you’ll definitely want to stay tuned for her wonderful pearls of wisdom toward the end of this episode.

I know you’ll love this conversation with Shannon as much as I enjoyed chatting with her.