“What it means to be bold for me is to act in a way that I like and am proud of myself.” ~ Dr. Pepper Schwartz

Today’s guest is Dr. Pepper Schwartz. You might know Pepper from any one of many places. She’s a professor of Sociology at the University of Washington. But she’s also the author of 25 books, the former Sex and Relationship Expert with AARP and she is now on her sixth season of Married at First Sight which airs on Lifetime.

In this conversation, we talk about the influence that the times have on us. In Pepper’s case, as a child 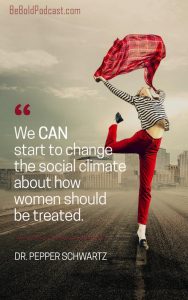 of the 60’s, she was surrounded by a culture of sex, drugs and rock and roll and she learned how to push the boundaries at a very early age.

A Yale graduate, she’s had a successful career at the University of Washington as one of the first professors hired for a tenured position (she’s now been there for 40 years).

She continues to change with the times and her teachings reflect her own interests and path including, now, sex in the aging population.

I’ve been wanting to talk to Pepper for a while. With the #MeToo movement, it seemed like a great time to finally make that happen given her expertise in sociology, sex and relationships.

So we talk quite a bit about this movement. Though she’s not 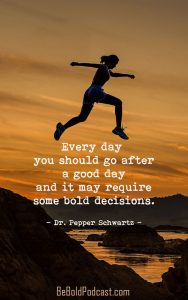 letting these guys off the hook, she does recognize that some of these behaviors are of another time—meaning the behaviors were more acceptable decades ago. She admits, despite her work in this field, that she’s still surprised at the level of abuse that has gone on, particularly in the entertainment industry where men have so much power over women.

I think you’ll really like this conversation. Pepper was (and still is) at the forefront of the women’s movement, especially when it comes to sex, and her perspective on this topic is quite unique, well thought out and draws from many decades of expertise and experience.

With that, enjoy this conversation with Dr. Pepper Schwartz.