“Being bold is having something in front of you that scares you silent, speechless, heart racing and you do it anyway.” – Jennifer Jordan

You might need a little context about today’s episode.

Jennifer’s the woman behind the documentary, 3,000 cups of Tea: the Rise and Ruin of Greg Mortenson. Greg’s name should ring a bell for you. He’s the author of Three Cups of Tea: One Man’s Mission to Promote Peace…One School at a Time. 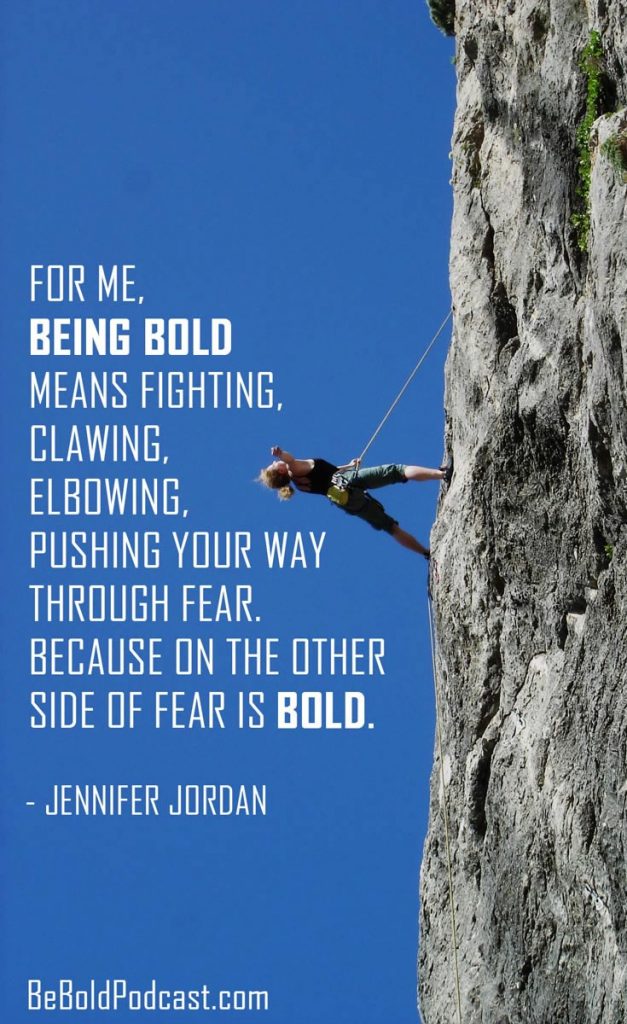 mountains to his work in Pakistan and Afghanistan building schools for girls.

I won’t go into all the details of the book because there’s a good chance you’ve already read it and, if not, you should!

The paperback version of Three Cups of Tea came out in 2007 and was a number one NY Times Bestseller for three years. It’s now been published in nearly 40 languages. Because of his humanitarian work, Greg co-founded the Central Asia Institute to help further his causes. To date, they have funded 400 projects in the region including the building of 300 schools.

I read the book shortly after it was published and loved it. I even had the chance to see Greg speak in Seattle many years ago.

But it hasn’t been all roses for Greg.

In April of 2011, 60 Minutes aired a report that was basically a take down of Greg. Their primary source for the story was Jon Krakauer, whom you likely know from several books he’s written including Into Thin Air.

In that program, there were numerous allegations waged against Greg including that he fabricated the building of some of the schools, he misallocated funds and that he outright lied about events that were documented in his book.

I clearly remember when this happened. As someone who has been on the board of several non-profits over the past 25 years or so, I watched this unfold with interest. I saw that 60 Minutes episode and, I’m embarrassed to say, that I didn’t question their findings. I just thought, “Shit, I better make sure that MY act is together when it comes to the work I do on these non-profit boards.”

I will say that in the back of my mind, I thought about all the schools he built. Though I haven’t been to Pakistan or Afghanistan, I’ve been to enough developing countries to know that education, particularly for girls, is often not high on a government’s priority list. So the fact that he was building schools to educate young girls, I knew that was a good thing.

I also knew that Krakauer had written his own sort of expose about Greg. And it seems like Krakauer felt taken by Greg after having donated quite a bit of money to the Central Asia Institute.

In any case, it appears that Krakauer was really behind the take down of Greg in terms of that 60 Minutes piece. And, according to Jennifer, he continues to be a threat in terms of allowing Greg’s side of the story be heard.

You’ll hear about some of these details in our conversation but in short, Krakauer has been successful in ensuring that this film doesn’t get wide viewership.

So that’s the back story.

Jennifer lives in Salt Lake City and I was recently there for Sundance. When a mutual friend offered to introduce us, I jumped at the chance. Having read Three Cups of Tea and having some knowledge about Greg and the Central Asia Institute, I was really interested in hearing this other side of the story. Jennifer was kind enough to give me access to the film prior to our chat.

While we begin this conversation with Jennifer’s background, we do spend quite a bit of time talking about this new documentary, why she made it, how she made it and her goal in having created it. As she says, she knows that Greg was not perfect. But the documentary certainly leaves one wondering why the take down of a man who was (and still is) doing so much good in the world.

As you’ll hear, Jennifer’s had a difficult time getting this into film festivals and theaters. I’m considering organizing a coordinated effort of home viewings. In my perfect world, there would be 100 people across the country willing to host an evening for 10 – 20 people where we could get some media attention for it. If you’re interested, please drop me a line at [email protected]

With that, I hope you enjoy this conversation with a very courageous woman, Jennifer Jordan.