“When you focus on the things you that are in your control, which is a mental skill, you tend to take ownership of things and tend to move on from situations that don’t go your way a little more eloquently, a little faster.” ~ Nicole Davis

It’s the start of a new year and I bet many of you have your lists of New Year’s Resolutions, goals or just thoughts about how you’re going to approach 2018.

If that’s the case, this podcast episode is for you! 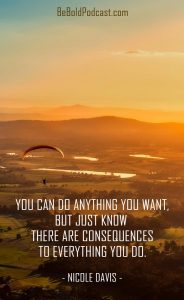 My conversation today with Nicole Davis.

Nicole is a two time Olympian, having won silver medals in volleyball at the 2008 and 2012 Olympics as the Libero position for Team USA.

She was also part of the 2014 US team that won the World Championships.

Today, Nicole’s position is that of a Mindset Coach at Compete to Create. Their goal is to provide high performance mindset training and coaching so that people are performing at their very best. If you can’t quite grok what that means, it’ll become really apparent once you listen to what Nicole has to say. 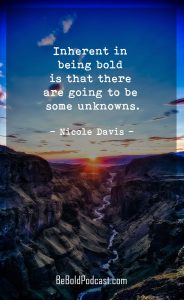 The conversation really centers around mindfulness and thoughts and the importance of both in terms of helping us all be better versions of ourselves (whether we have big goals or more humble aspirations). As she points out, our thoughts influence our language and our language reflects culture.

In the case of her work, in this conversation she was likely talking specifically about team sports and high performing work environments but in reflecting on this, I think it’s a really great way to think about our own personal environments. Whatever microcosm we live in whether it’s our home, our work, our neighborhood, our city and beyond.

There are so many gems in this conversation that I know you’ll want to be prepared to take notes, particularly toward the end when she talks bout being bold. Just wow. So, get ready with your finger on the pause button and grab something to write with.

With that, enjoy this conversation with Nicole Davis.